Winter Sports on the Road during Winter Break

As the books closed on final exams in December, most students escaped the Purple Valley for some well-deserved rest. For many of student-athletes competing in the winter, the rest was short-lived.  Teams came back together during the break to travel, train, and compete away from the Berkshires. The following is an inside look at a few of this year’s trips.

Written by: #18 Wyatt Glover ’20 (Sr., Sewickley, Pa. / Shady Side)
For this year’s winter trip, the hockey team traveled to Oswego State University to compete in the annual Pathfinder Hockey Classic. This was one of the strongest tournaments in Division III hockey, with three out of four teams being nationally ranked. In our first game against the University of New England, we went down 1-0 after the Nor’easters converted on a power play in the second period. We responded to this with a power play goal of our own by Nick Altmann with 40 seconds remaining in the second period. Altmann then scored his second of the game early in the third period, and that combined with stellar goaltending by Cosimo Lazzarino was enough for us to secure the win. We played the following day for the championship versus St. Mary’s University. Despite playing some of our best hockey of the season during the first period and a half, some defensive lapses at the end of the second period allowed SMU to go ahead 2-0. We continued to play hard and battle back, but it ultimately wasn’t enough and we lost 4-2.

I know I speak for the entire team when I say that playing at Oswego is truly a special experience that all of us greatly enjoyed. The facilities are among the nicest I have seen in Division III hockey, from the locker rooms to the arena and ice surface, and the passionate fans and hockey community in the town make it an exciting place to play. 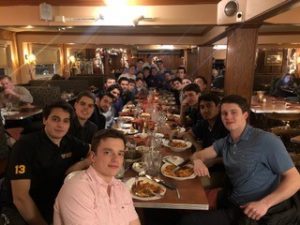 The trip as a whole was also a great bonding experience for our team. With the long bus ride to and from Oswego, staying there for three days, and enjoying a great dinner at Canale’s restaurant, our entire team felt much closer after the trip was over.

Despite having a disappointing finish, we feel that this tournament was an important step forward for us. We defeated a top 10-ranked team in the country in UNE, and clearly showed that we have the ability to beat any team we step on the ice against. Our offensive depth, strong defensive systems and elite goaltending all give us a great opportunity to make history at Williams by winning the NESCAC conference and making a push in the NCAA tournament. 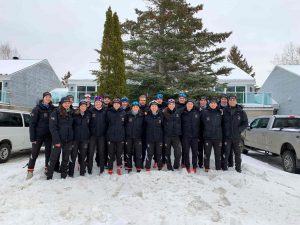 The Nordic Ski Team spent six amazing days skiing at Mont Sainte Anne in Quebec, Canada. With plenty of snow and very little homework, the team thrived. Training included two time trials, a 5/10km skate individual start and a 10/15km classic mass start, and a three-and-a-half hour over distance ski which we were able to do on a single 40km loop. Down time was spent preparing delicious dinners for each other, playing Bananagrams, napping, and watching World Cup ski races. We were delighted to have some of our juniors, Isabel Lane and Franklin Reilley, rejoin the team after being abroad for the fall semester. Another highlight was our annual variety show held on the last night of camp: acts included a stunning display on modern art, highly competitive ski waxing, a confounding magic trick, and a handstand salon wherein freshman Hadassah Lurbur did a handstand while freshman Lilly Bates painted her toes– very impressive all around. 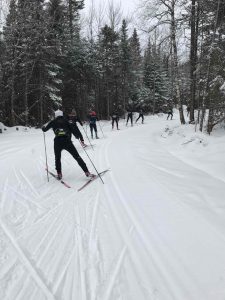 We are so thankful for our coaches, Jason and Gerrit, and Williams College for making this training trip possible!
Looking ahead, our first official carnival race weekend is coming up on January 17th and 18th, and then we race almost every weekend for the next six weeks. Both the men’s and the women’s team are aiming to send representatives to NCAA’s in Bozeman, MT in March. Additionally, we are all super excited to host at Prospect Mountain for the Williams Winter Carnival in February. Rock the cow!

by Wyatt Khosrowshahi ’21 (Jr., Briarcliff Manor, N.Y. / The Hackley School)
Following a strong start to the season, the Williams Men’s Squash Team headed to San Francisco for its midseason training trip over the holiday period. From December 26-31, the men trained diligently with morning squash sessions at the San Francisco Bay Club from 8:30-11, followed by afternoon cross-training in the form of gym work, cycling, running, and swimming. 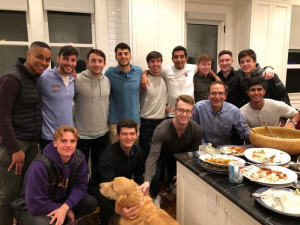 The morning trainings provided an opportunity for a combination of focused drilling for sharpness, and challenge matches for some fitness and friendly competition. Aside from the cross-training sessions, the afternoons also allowed the men some opportunity to explore the city as a team; this spare time was used to walk around the area, try new restaurants, and even catch up with some Eph alumni!

The men stayed in Fisherman’s Wharf, which provided a great atmosphere for walking around and experiencing the city. With each morning came a beautiful walk along the water to the squash courts, and the walk back also provided many great lunch options. In the afternoons, the men would walk to nearby Ghirardelli Square, which is located adjacent to a great public park. For dinner, the team explored a number of similarly walkable options, including a trip to Chinatown one evening, as well as a couple nights devoted to testing out San Francisco’s famous Mexican cuisine.

Now back on campus, the Ephs will enter the second half of the season in great spirits and well-prepared thanks to the opportunities provided by the training trip. The hours of training, gym work, and mental preparation will undoubtedly prove essential come some grueling matches in January and February in what promises to be a great year for the program.

by Ellie Sherman ’20 (Sr., Rockville, Md. / Richard Montgomery HS)
Our training trip this year began a bit earlier than we all would have liked – we boarded the bus at a prompt 4 am and headed off to the airport, feeling bright-eyed and bushy-tailed, ready and excited for a week in sunny Florida. 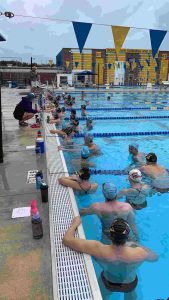 Our plane hit some turbulence as we foraged our way through a snowstorm, but luckily we landed without any problems (despite the flight attendants calling for a doctor mid-flight to assist a man having a panic attack next to two of our swimmers). Once we finally landed, we all shed as many layers as physically possible before heading to Fort Pierce, our home for the next week. After a quick stop to drop our luggage, we were back on the bus to head to Indian River State College for our first practice. The sun was shining; the sky was clear; the omens all pointed to a beautiful week, and we welcomed the chance to soak up some Vitamin D.

Unfortunately, the good weather was not to last – the remainder of the week saw grey skies and rainstorms, but our spirits stayed as high as the sun on that first afternoon. Life on Hutchinson Island was made memorable due to the unique living arrangements: we stayed in groups of three to six in private condo complexes, all within walking distance and located in areas with names such as “Coral Cluster” and “Golf Villas”. While the gated community we found ourselves in was lacking restaurants or fast food places, we were able to take full advantage of our homes away from home to practice our culinary skills. Thus the Ephs spent the week feasting on everything from chocolate chip pancakes to salmon and lentils to Tyson’s chicken nuggets. Some learned a new recipe or two, and some asked their roommates to make them dinner every night. Regardless, fun and excitement abounded. Many of us also made good use of the multiple pools and hot tubs around the premises, and most visited the beautiful beach (within walking distance!) at least once, despite the nasty weather.

Our practices featured a number of fan favorites, including Distance Day, 26/32 Club, and Test Set. The divers also had a stellar week: all four of them learned new dives and perfected some of their focal points for the upcoming season. They benefitted from having a fresh pair of eyes from the Ithaca coach while still being virtually guided by the Wesleyan diving coach, Devon.

Coach surprised us all with Beach Day on Friday afternoon, but unfortunately the weather prevented us from actually making it to the beach for our typical activities. Instead, the Ephs enjoyed an afternoon of relaxing and resting up for the annual volleyball tournament, which did continue despite the rain. The tournament was filled with upsets and egos, but ultimately the title of 2019 Volleyball Tournament Champions went to Bingo Orringo 2: The Empire Strikes Back, a team made up of Katie Orringer, Emily Lock, Zeb Hart, and Nick Whitcomb. 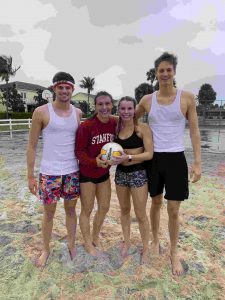 The Ephs were also feeling pretty lucky when Coach broke out the dice after one round of test set at one of the final practices of the trip. Andrew Trunsky started off strong by rolling the team out of our first set of 100s. Next came some well-earned easy 75s, courtesy of the junior class. The sophomores and first years followed suit by canceling out the remaining sets in practice, a surprise ending to an exhausting day. The sun finally came out for our last practice in Florida, which saw the Ephs battling through the classic Stanford set. Morale trumped physical exhaustion, as the team cheered each other on through one of the most rousing renditions of the set we’ve experienced to date.

We finished strong, with every member of the team ending training trip by taking a jump off the three-meter diving board, taking notes from our very own Gabby Mercier on entry and form. Our final dinner was Chinese food and pizza under the stars. We were able to enjoy the warm air only briefly before rain sent all team members scurrying for cover – however, we left the trip with a strong sense of camaraderie, accomplishment, and excitement for what is to come with the New Year.

The annual trip to the South Beach Wrestling Experience has become a winter tradition for the Williams men of the mat. 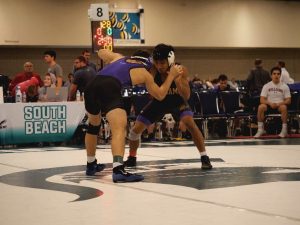 The nationally competitive event features a national field of top-flight competition including returning NCAA Champions Augsburg and familiar in-region foe NYU. After a day to acclimate (and adjust back to weight after a short holiday break), the entire roster participated in the individual tournament-style competition over the two days. David Yeh ’22 (Needham, MA) was our leading performer with his 5th place finish, but every Eph grappler recorded at least one victory in this event.

The opportunity to travel from home and meet in Fort Lauderdale helps our guys enjoy some much needed rest at home before meeting in Florida for the first time since the conclusion of final exams. Returning as a team on New Year’s Eve to Williamstown was a great way to ring in 2020. The coaches certainly appreciated the opportunity to focus on wrestling without the academic demands during the first week in January. With half the competitive season in the books, this young team sits with a 6-4 with a few great upsets over teams like Wesleyan, Wilkes, and Oswego. We are poised for a great sprint to the finish with the championship portion of the season around the corner.

See our Covid-19 website for strict health and safety protocols for those who remain on campus. All Williams College buildings are closed to the public and visitors until further notice.